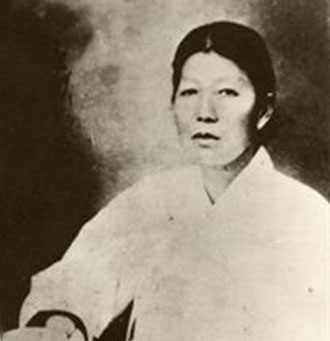 Nam Ja-hyun was born in 1872 (9th year of Gojong) in Jigyeong-dong, Seokbo-myeon as the second daughter of Nam Jung-han. Her husband heroically died in a justice army while fighting the Japanese. In succession of the husband's will, his wife started by taking part in the Independence Movement and then later sought asylum in Manchu and became the mother of Independence Army.

The husband was Kim Byung-ju and the wife was Nam Ja-hyun. Jigyeong Village is the home town of Nam Ja-hyun. As a female fighter for independence, Nam Ja-hyun took a pioneering role in the Independence Movement as a woman and took her posthumous child to Manchuria to establish Joseon Female Education Association in Manchuria to spread patriotic enlightenment movement.

Also, she put her efforts in uniting independence movement groups scattered all over the place and devoted her whole life in independence movement by murdering key figure, promoting movement for the release of fighters of independence and appealing the international society for independence until she was captured in Harbin and then released in the brink of death after brutal torture and then died for the country. In 1962, the Korean government conferred the presidential award as the Order of Merit for National Foundation to remember the noble spirit, and Yeongyang-gun has restored her birthplace in 1999.