Author of 'Umsildimibang', the first food recipe book in Korean

Jang Gye-hyang, a woman of virtue 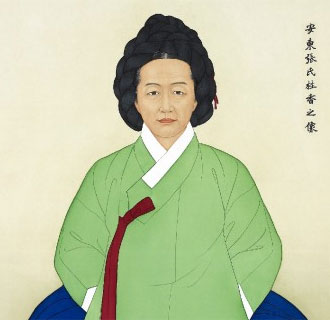 Born in Geumgye-ri, Andong Gyeongbuk in 31st year of reign of Seonjo, she passed away in Seokbo, Yeongyang, Gyeongbuk at the age of 83 in the 6th year of reign of Sukjong. In the latter year, her third son Galam Lee Hyun-il was called upon in the forest as the Minister of Interior given only to great scholar and national leader. And therefore, according to the national law, mistress was ranked.

'Umsildimibang' is a recipe book accumulating the knowledge of Jang Gye-hyang for her descendants at the age over 70. She put her wisdom of life from her entire life in every corner of the recipe book. Despite her high proficiency in Chinese characters, in her desire for descendants to find it easy to read, she wrote in Hangul. As the ancestor of writer Lee Mun-yeol and the main character of his novel 'Choice', Jang Gye-hyang devoted her life as a benign mother, smart wife, dutiful daughter and benevolent adult, until she passed away in the Seokgye house in Dudle village, Seokbo-myeon of Yeongyang-gun at the age of 83 in 1680 (6th year of reign of Sukjong), she endeavored in training children to restore the family and produce eminent scholars and men of reputation. 'Diary of Mistress Jang', translated by third son Hyunil in Hangul has recordings of Jang. After getting pregnant, she strictly performed prenatal education according to 'Yeolnyeojeon' and taught her children by benevolence and discipline. Also, during the bad year, she hung a pot outside and cooked porridge and rice to feed people, looked after elders with nowhere to depend upon and she was highly reputed for bringing up orphans. Also, as she served her parents on the husband's side as well as her own and kindly devoted in filial duty, her children also devoted in filial duty.

In recognition of these achievements, in November 1999, the Ministry of Culture and Tourism designated the woman of virtue, Jang Gye-hyang as the 'model of great mother' who made an example of educating the children, and Yeongyang-gun set up a memorial stone and relic exhibition center in front of Dudle Village in admiration of her virtue.

Dudle Village, on a historic hill-top of the origin of literature alive with tradition

Dudle village is the home of Gwangjewon in the Joseon Dynasty, and is also called Wondudle or Won-ri meaning 'a village in Dudle where won located'. Since 1640 (18th year of reign of Injong), when Seokgye Lee Si-myung was ashamed of national humiliation of Manchu invasion and pioneered this village, the fourth son of Seokgye, Seungil passed down the generation, and with descendants, the this place became a family village of Jaeryeong Lee. On the hill next to the village are remaining of Seokcheon Seodang and Seokgye old house of Geokgye, and on the rocks standing next to Hwamaecheon stream flowing in front of the village are writings on Nakgidae and Sesimdae known to have written by Hangjae Lee Seung-il, the fourth son of Seokgye. Recently, Umsikdimibang Learning Center, memorial stone of Mistress Jang, house of manners, Umsildimibang Education Center, Gwangsan Literature Research Center and book cafe are established.